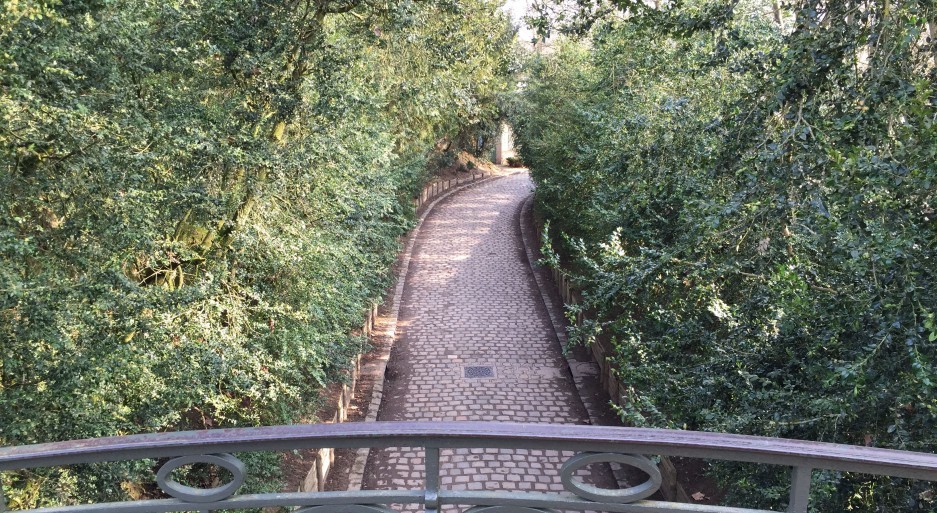 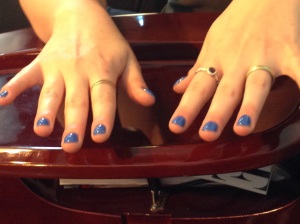 She carried anxiety like I do, but she tucked hers away expertly. She had lines on her forehead and made funny, sucking sounds with her mouth. Sometimes, she would fidget with her long nails or leave one cigarette burning in a crystal ashtray, and light another one. I adored her and fled to her for safety.

She was an expert on fun. Fun helped cover up the pain. Fun sometimes came from trips to warm, tropical places. She stayed in the shade then, or in the cabin of the boat. At night she would dress in her finery and order dessert for me before the appetizer course. She loved gin and caviar, and oysters and lobster and taught me to love these things too. The gin came later, but the lobster was consumed at six, on my birthday. I threw up all over the car, but she did not get angry.

Sometimes, we went to the southern mountains on vacation and she would pack gin in her suitcase. This was because the hotel did not serve alcohol with room service. Also in her suitcase were beautiful dresses and ladylike shoes with pointy toes and dainty heels. I once argued with my mother for weeks, wanting heeled shoes without a strap. I used Chapstick on my lips in place of lipstick and grew my nails and stopped biting them. She wore gloves when she went out on occasions. Some were short and white; others long and black. While she was napping, I would try them on and prance in front of her dressing room mirrors. There were four mirrors that swiveled and if I positioned them just right, I created a chorus line, wiggling and dancing to an imaginary song, gloves and heels adorning my kilt and woolen knee socks.

She slept well at night because she took a pill that knocked her out. We would call her in the evening, but mother would bang the black receiver down on the rotary phone. “Damn pills!” she would yell as she slumped in her kitchen chair, taking a drag on her low-tar cigarette. In the morning, I was often dropped off at her house before I went to school. She drank cold coffee and lots of orange juice. There was gin in the orange juice, but I never smelled it. She would map out her day in the morning. Maybe there would be a trip to the grocery store, in her gleaming, always new, Cadillac. Maybe she would invite her friends over and they would listen to Barbra Streisand on the Victrola while telling stories and chain-smoking. Sometimes she went clothes shopping and brought me with her. Other times, she would dance around her living room to Frank Sinatra, or paint my nails bright red, or let me look at the large charms on her bracelet that jangled when she moved her long arms. She sometimes danced on the coffee table, her feet bare, except for her silky stockings. Laughing, she would kick her legs and show me the flapper dances that she learned in her youth. She was beautiful then, and I knew that she had been stunning when she was younger. I could imagine her in a beaded dress that shook as she shimmied. I understood why he had been drawn to her.   She had a charm that was magical and magnetic and drew you into its spell.

I went away to college one fall, and called my family once a week on the hall telephone. The phone was on a small table, and there was a chair where I sat as I dialed home. Others hovered nearby, waiting their turn to make their calls. They pretended not to eavesdrop. I dialed home to tell my mother that I was fine and that I was doing well in school. That was the gist of these tedious, once-a week communications. This time though was different. I learned that she had died. I was young and the pain of loss was new to me. It was a loss that was not unique; loss is universal. I would learn, though, that she had left behind a legacy. I would dance with my children, and to sing in the car. I would sometimes allow them ice cream, before dinner. We would plan adventures and I would keep my children close and keep my heart light. I would talk about her and share my stories; the day she danced on the table at Kelly’s, the time that she gave me ten dollars and let me shop on my own in the city, the time that she told me to eat more slowly and not gobble up my food. She was a force greater than death and I hear her laugh now. It is in Oakland and in New York and in Middletown.

One thought on “Legacy”